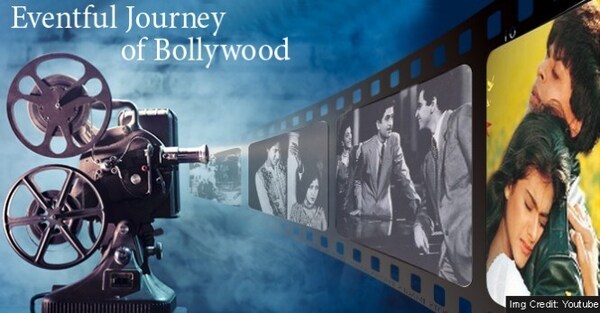 Bollywood,the part of largest film industry creates more than 1000 movies a year.Indian cinema is famous worldwide majorly due to bollywood. Bollywood hasemerged even before India got independent and has served its audience with various entertainment pieces throughout all these years. Hindi cinema has gone through different stages of success and failure but has never died.

We can observe the changes that have happened in bollywood through all these years. The changing trends in bollywood can be seen when we compare the concepts of the movies from 19th century and 21st century. The way movies were made then is completely different from the way they are made now. Let us dig deeper to the history of Indian cinema to know what exactly has been changed.

The history of Indian Cinema goes back to 19th century when Lumiere brothers released their movie for the first time in India in Mumbai (then Bombay). The movies were particularly 40 sec clips named ‘Arrival of the train’ and ‘Leaving the factory’. The clips showed a train arriving and people leaving the lumiere factory. These two were the films which were released in India for the first time.

Inspired from Lumiere Brothers, Harishchandra Sakharam Bhatavdekar, also known as Save dada ordered a camera from England to shoot his first film, ‘The wrestlers’ which was later known to be to be the first motion picture of India as its post production was not done in India, it is not mentioned in the history of Indian cinema.

The history of Indian cinema starts from Silent era

The first ever full length feature film which was shot, edited and released in the India was ‘Raja Harishchandra’ in 1913 by Dadasaheb Phalke who is known as the Father of Indian cinema. Not only the producer, but Dadasaheb Phalke was the director, writer, cameraman, as well as makeup artist of his movie. It was a 40 minute silent film which has shown the truthfulness of Raja Harishchandra in every span of his life.

After Raja Harishchandra, Dadasaheb produced about 23 movies from 1913 to 1918 and many other production houses were also introduced between these years. This era was known to be Silent era because there used to be no sound or dialoguesin the movies of that time. The era ranged from 1894 to 1929.

In 1931,Indian Cinema started to talk. The first ever talkies film was Alam Ara dierected and produced by Ardeshir Irani. The movie also gave birth to music. The first ever music director was Phiroz shah who directed the song De de khuda ke naam par sung by W.M Khan. This era was known to be the talking eraof bollywood.

Independence brought a bright chance for Indian cinema to grow everywhere it was lacking. The era from 1950s, known as the Golden era of Indian Cinema brought many new and different genres to the industry. Directors like Bimal Roy,Satyajit Ray brought films which were based on topics like discrimination of lower casts, women empowerment, racism, prostitution, dowry, porigamy etc. The movies in this era were majorly based on social issues which were faced by people back then. Movies like Aprajito,Mother India, Pyaasa are some of the examples.

In 1960s, the bollywood focused on showcasing real problems faced by common man which audience could relate to.

Indian film cinema has no longer limited to few genres, it is bringing a whole new collection always keeping the audience amazed. Moreover, its audience are no more limited to India, bollywood movies are released and liked in foreign countrieswidely. A major and recent example is Andhadun which was released in China as Piano Player and it was a blockbuster there. From 1913 to 2019,bollywood has grown rapidly and it is nowhere looking back.